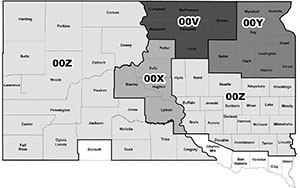 All nonresident temporary waterfowl licenses, with the exception of NRW-00Y, are valid on private land only. The Commission established the following units and license allocation for these three day licenses as such:

Nonresident 10-day and season-long licenses remained unchanged from 2016.  These licenses, valid on both private and public land, include the following:

More information on nonresident waterfowl hunting opportunities can be found at http://gfp.sd.gov/hunting/waterfowl/nonresident-waterfowl.aspx.